Click here for Searchable articles about Healthy Cooking and Eating 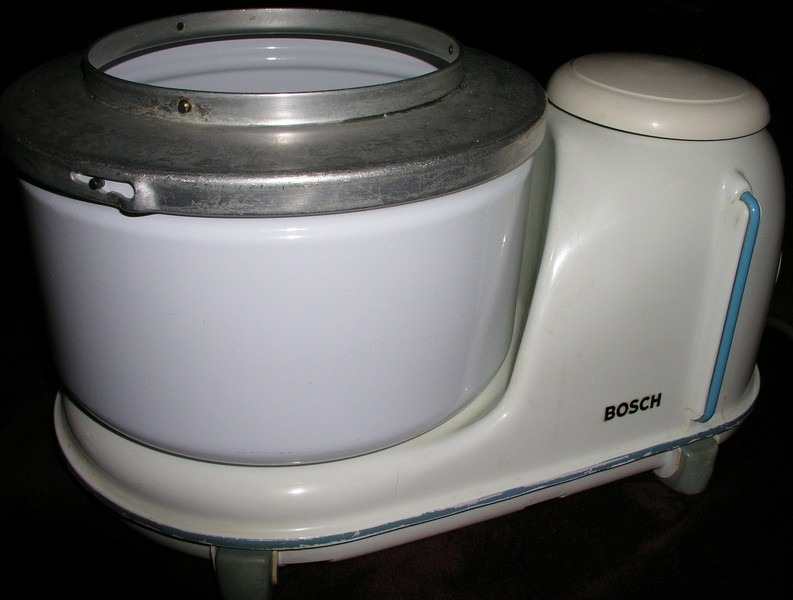 1951  The Bosch kitchen Machine changed kitchens everywhere. Cooking formerly done with hard work and manual  labor was now being done by the Bosch Kitchen Machine. Kitchen chores were getting done better and faster than ever before. Housewives were experiencing more free time for themselves, and spending less time cooking.

1958  By the end of the fifties Germans were getting used to new prosperity.  In 1958 Bosch jumped on the bandwagon with the “Neuzeit II” an elegantly designed kitchen machine with a blender accessory on top;  it also featured a novel extension arm for a whisk and dough mixing. The Neuzeit II was the perfect kitchen helper for the new age of epicurean tastes.

1960  Bosch redesigned the kitchen machine with a lighter weight polycarbonate house and bowl.

1978  Bosch successfully launched two new kitchen machines:  the UM 3 and the UM4.  They were 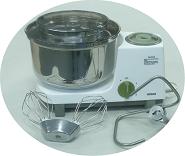 Bosch’s answer to the growing customer demand for individual options. UM 3 was the predecessor of the MUM 6 series. With its new multi-function arm and design, the UM 4 is a precursor to the MUM 4.

1984  Bosch introduced the MUM 6, which at 700 watts was the most powerful kitchen processor of its time.   With the introduction of the MUM 44 in 1987, which featured an innovative multi-functional arm, the foundation was laid for today’s MUM family. 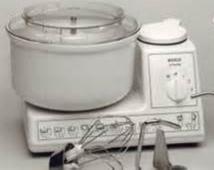 1998  The ‘Modern Age’ dawned at Bosch and the current product line in its basic form was completed. The MUM family, consisting of the 4 series and the 6 series, was joined by the MUM 7 CONCEPT which was introduced in Europe. This revolutionary design featured a single placement position for all accessories, making it unique in its product category.  It was introduced in the USA in 1999 after several    refinements were completed.

2007   After 23 years of success in the market place with the UNIVERSAL Kitchen Machine, Bosch introduced the new Universal Plus completely redesigned with impressive new European Flair and a more powerful 800 watt motor.

Coupled with its added safety technology and list of improved performance features, the success story of the mixer will continue to add to the impressive reputation of the BOSCH Kitchen Machine history.